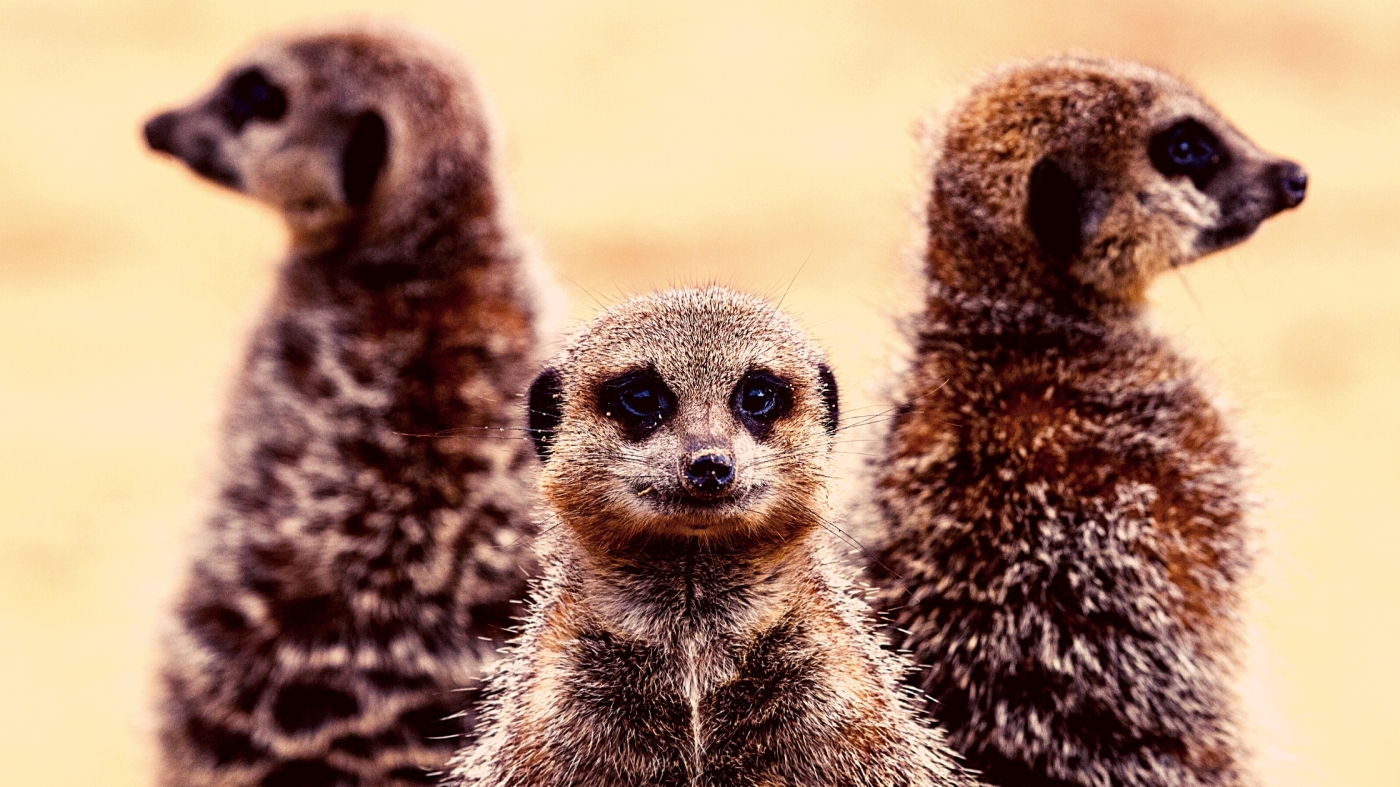 In the moons that followed Star and Bringer met with Storm, Claw, Listener, and Greatwing at the hollow tree many times. The six desert dwellers became close enough to show one another their homes and ranges. They introduced one another to family members and a pact was agreed on. Each took an oath not to harm one another and to respect the lives of each other’s species.

Star grew. His snout lengthened and sharpened. His fur became coarse and his senses honed. He taught himself, with the aide of his friends, to dig tunnels, sniff out insects, and stalk frogs and lizards. By the time he was a yearling he felt that he was ready to join The Gang and finally find out who his mother was. It was Bringer and Listener who escorted him to the edge of The Gang’s territory. From then on Star traveled alone.

It didn’t take long for Star to find the meer family. He came over a stony ridge the next morning and was greeted by the sight of many meer foraging across the dune below. He quickly flattened himself and dashed under the cover of a shrub. His heart pounded and he panted as he observed the group.

Calm down, he ordered himself, just go over and introduce yourself.

Shaking out his pelt Star crawled from his hiding place and stood up straight. He pictured Claw and her confident, cool strides. He held his head high and tried to emulate her as he strode down the dune.

It wasn’t long before one of The Gang’s sentries spotted him. A splitting alarm bark had the whole group staring in his direction. Star swallowed and halted, unsure of how to proceed. He was saved the energy of planning when a weight slammed into his flank. Star was flung onto his side and a big paw planted on his cheek. Star sneezed as sand filled his nose.

“Let him up.” A dangerously low voice instructed. The meer pinning Star stepped back, allowing Star to jump to his paws. Star swung his head, the fur along his ruff bristling and tail straight in the air, to glare at his attacker. He saw a big meer with ragged ear tips that wasn’t much older than him.

“Speak, meer!” The low voice snapped near his ear. “Where are you from and why are you trespassing on my territory?”

Star flinched and glanced at the male meer lurking at his side. The leader of The Gang bore the scars of bites to his throat like trophies. His gaze was dark, and he was bulkier than any meer Star had ever seen.

“I-I,” Star stuttered. “I was born on an island far from here. I came because…because I thought my mother might be among your number.”

The leader and Star’s attacker exchanged glances. Then they both burst out into deep, rumbling laughter. “Your mother?” The leader cackled. “I doubt you’d find your mother here.”

“No meer would dare steal from The Gang.” His attacker added.

“Right you are, Thorn.” The leader praised and Thorn beamed.

Star frowned. “Steal from The Gang?”

Thorn regarded him as if that were the stupidest question he could’ve asked. “A female who’d bare a Gang male’s litter outside of the family is stealing Gang property.”

“You mean the pups? She’d be stealing…her own pups?” Star clarified, his pelt rankling at the absurd notion.

“Of course.” The leader answered smoothly. “If that’s all you’ve come for-”

“No!” Star interrupted but then shrank back as the leader narrowed his eyes. “I mean, no. I’ve come to ask for a place among you. I want to join The Gang…” He stared at the leader expectantly.

“Gnash.” His tone was curt.

“Gnash, please.” Star begged. “I want to join your family.”

Gnash padded a circle around him, appraising. “Alright. I’ll allow you to stay for a turn. If you can prove yourself in that time, then I’ll let you stay for good.”

Star gave a hop of joy. “Thank you! Thank you so much!”

Gnash ignored him. “Thorn.” He barked. “Watch him.”

Thorn gave a serious nod and Gnash turned on his heel. Once his leader disappeared through the bushes Thorn nudged Star’s shoulder. “Let’s go.” His voice was gruff.

Star’s mood could not be dampened by Thorn’s sour tongue and he pushed their odd comments about theft to the back of his mind. He was sure he’d understand what they meant after he had lived with The Gang. Thorn herded him down to join the rest of the family in foraging. He earned many curious and hostile looks as Thorn brought him to a sparse spot. “You can forage here.”

Star nodded and did as he was told for the rest of the day. It wasn’t until he was settling in for the night that he spoke to any other meer. Thorn led him into the burrow and to a cramped chamber. Star understood that he was to sleep there and picked his way to an empty spot. He used his whiskers and nose to find it but still managed to step on a few tails. He tripped over a lump in his path and landed in what would become his sleeping area.

“Sorry.” Star murmured and gave his chest fur an embarrassed nibble in the dark.

He felt the lump stir next to him. “You’re new, right?” She asked.

“Star.” She spoke like she was tasting the word. “I’m Wing. I just wanted to warn you to watch your tail.”

“Watch my tail?” Star repeated as a feather of unease flutter in his belly. “Why?”

“The Gang isn’t an easy group to live in.” Wing mumbled. “Your guard? He’s part of Gnash’s elite. The elite are tasked with keeping the rest of us in line.” The phrase was heavy with meaning and Star could feel the intensity of Wing’s stare on his fur.

“I don’t understand. I thought this family was the best in the desert.”

“Family.” Wing snorted. “I wouldn’t call The Gang a family. And we’re not the best, just the biggest.”

Star tilted his head, another question on his tongue but before he could ask another meer joined the discussion. “Stop scaring him, Wing.” She murmured. He felt her shift closer to him on his other side. “Don’t mind her. If you obey Gnash, you’ll be fine.”

“Get your snout out of my business, Ripple.” Wing hissed.

Ripple’s voice pitched low. “You don’t want to find out.”

Despite the ominous warnings that he received from Wing and Ripple; Star found his next few days with his new family pleasant enough. The Gang’s territory was rich with insect life and he soon made other acquaintances amongst their ranks. It was only as the moon began to wax and his days dwindled that dread settled in his gut. Gnash had given him a turn to prove himself and judging by the impatient stares that the leader continued to throw his direction Star guessed that he had not yet done so. The problem was that he had no idea how to do that, and he wanted a permanent place among The Gang, even if Gnash could be surly at times.

His chance came the morning of his sixth day with The Gang. He was torso deep in a hole near Wing when Thorn’s gravelly alarm bark shattered the peace of the early routine. Star backed out of the hole, scattering soil, and he rose to his hind legs. He scanned the surrounding shrubland and spotted a glistening black shape slithering towards the family. It was Bringer.

Gnash appeared at his side. “I have a task for you.” He growled. “Go and chase the cobra from our territory.”

Star’s eyes widened and he dropped his weight onto his haunches. “By myself?” What if he was wrong and that snake wasn’t Bringer?

“Yes.” Gnash’s dark gaze glinted. “Unless you’d prefer to survive the desert without a family to protect you.”

Star swallowed and glanced between Gnash and the approaching serpent. He stood and shook himself as he made up his mind. “Alright, I’ll do it.” He declared before plunging through a maze of shrubs.

As he came upon the cobra, fur bristling along his spine he was pleased to see that it was Bringer. Star trotted to the snake and rubbed his chin against his scales. A pleased hiss vibrated his coils. “St…Star. How are you?”

“I’m…” Star glimpsed over his shoulder to see that The Gang had gathered at the far end of the dune and that Gnash was watching them from the top of a battered tree trunk. “Fine. I like it here.”

“Good. The others want to meet on the island at the next full moon.” Bringer informed him as he undulated his coils, shifting forward. He flicked his tail tip at the cluster of meer below. “Aren’t you going to introduce me?”

Star scratched at a nonexistent itch on his shoulder. “Umm…well…here’s the thing Bringer, they’re…scared of snakes.”

Bringer’s tongue flickered. “So were you, until you met me.”

“Yes, I know.” Star began awkwardly. “It’s just…they sent me up here to drive you away.”

“Drive me away?” Bringer was incredulous.

“As a way to prove my worth to The Gang.”

“You shouldn’t have to prove anything.” Bringer muttered darkly and his hood unfolded.

Star sighed. “Please, understand. I want to be welcomed among my own kind, Bringer.”

Star sat back. “No, I didn’t mean-” He tried as guilt swamped him. He hadn’t meant to hurt his oldest friend’s feelings!

Star leapt back, his fur spiking as the snake bobbed his head. Bringer’s mouth was only half open though, keeping his fangs concealed. Gratitude warmed Star’s heart as he forced his lips apart in a fake snarl of hatred. He jumped for Bringer’s throat.

The cobra dodged and Star fainted a turn. Bringer hissed with rage but lowered his head slightly in mock fear. Then he swiveled and drew his coils in. Bunching and unbunching his long body as he made his escape. Star panted and watched his retreat. Cheers and chirping calls greeted his victory from below. When he looked, Gnash was no longer in the tree studying him. He was now a full member of The Gang.

The first in a new and humorous short story series!
New domain, new logo, new stories, and new look! Website revamped! themeerseries.com
For one week only! Ebook short stories including What The Tiger Taught, The Phases of Anubis, and The Moon-Eyed People available for $0.99 at www.amazon.com/author/ellaurashoop
Three of my short stories are now available on Amazon. Check out my author page for more info: www.amazon.com/author/ellaurashoop 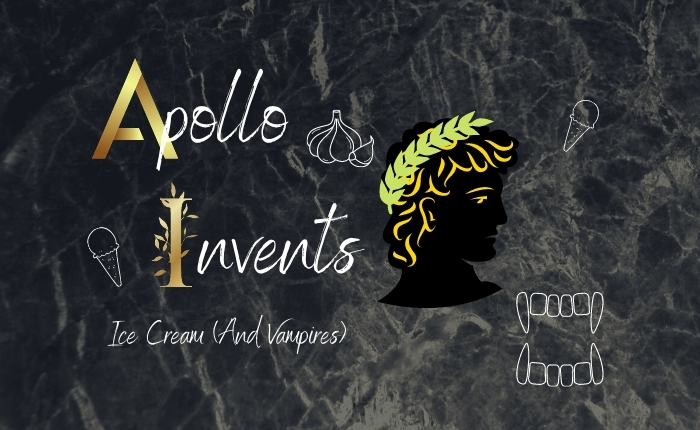 Apollo brandished a clay bowl in the palm of his hand, inserting it into his twin’s face. Artemis’s silvery eyes crossed as she tried and failed to determine what inhabited the bowl. “Apollo,” she pushed the bowl away with one finger as if it was infectious, “what is that?”             Apollo lifted his prominent nose. […] 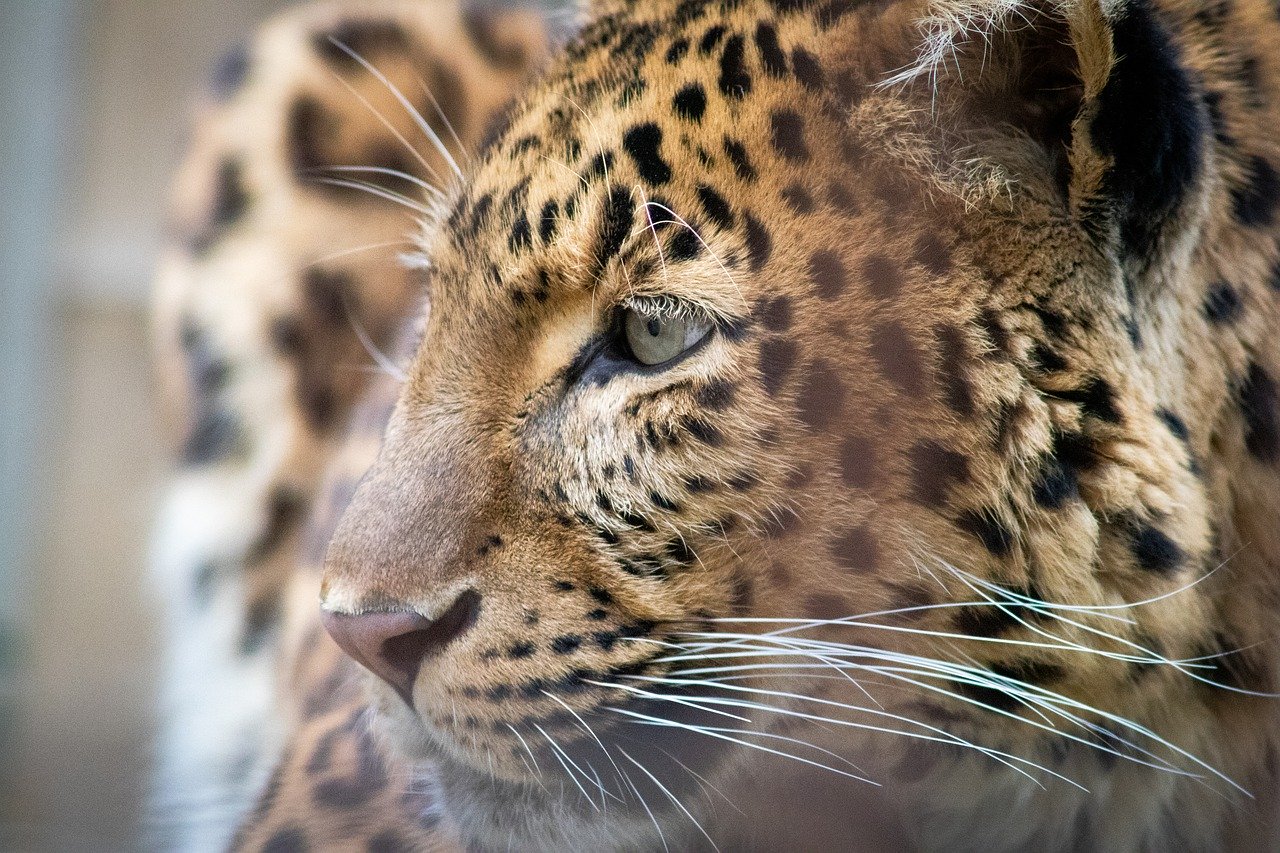 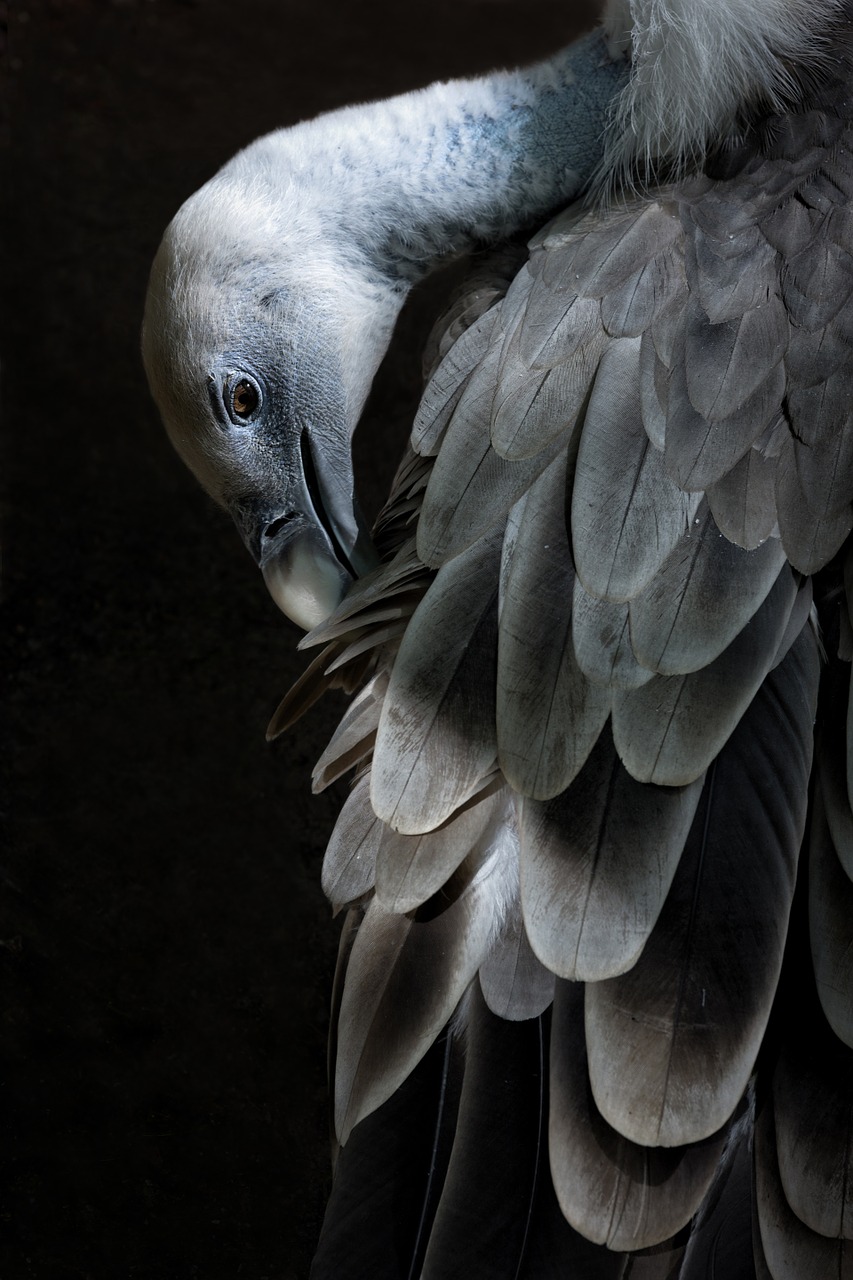 Next up, is identifying the theme of your novel. Most likely you’ll be able to apply a universal them to your novel, something that is a widely known and easily relatable. Examples of these themes are: coming of age, unrequited love, sacrifice, good triumphs over evil, money doesn’t equate to happiness, and so on. The […]

Once Upon A Bookshelf